When I get a knife from Takefu Village, I sort of know what to expect. The profiles, the grinds, the fit and finish - nothing really surprises me. They all seem to spring from the same extended family.

The Matsubara line of knives is clearly from a very different clan.

Matsubaras share a few patented features: They are unusually tall knives. They have high and thin tips. They have high, shallow grinds. And they are decidedly forward weighted.

The Matsubara tall nakiri (bottom one in photo) stands by itself. It’s obviously very tall, about 75 mm, and weighs over 8 oz. 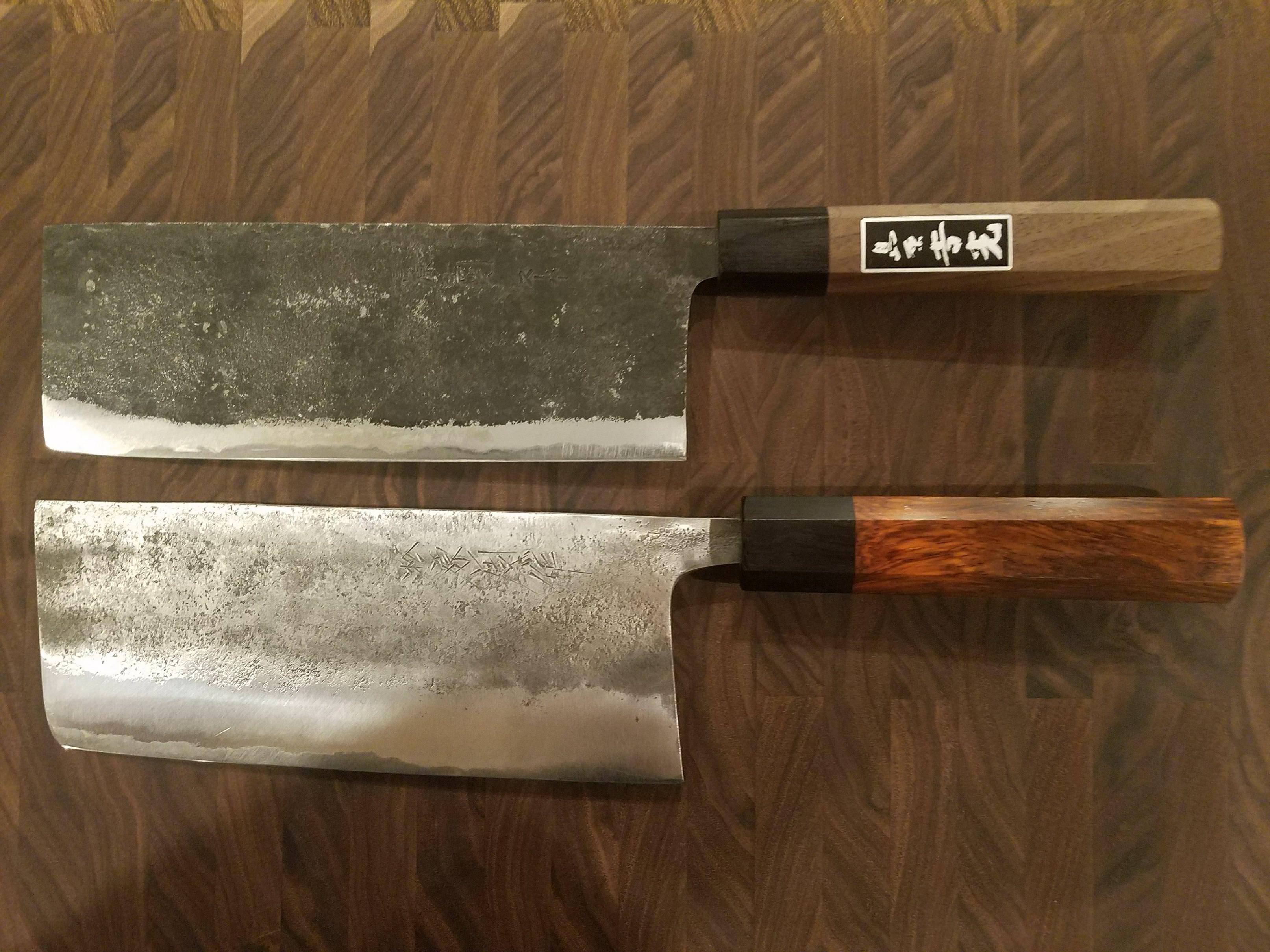 The tall nakiri is a superb cutter and chopper, performing much better than I expected from its appearance. One of these would have fit well in the hands of Paul Bunyan.

Granted, I didn’t find it all that nimble for horizontal cuts on items like shallots, but as an up-and-down chopper it has few equals. Put my old Dexter Russell Chinese cleaver to shame.

Like all the Matsubaras, the spine is somewhat thick and that lends to a stiff blade. The grind seems to start fairly high up and gradually narrowly to a very thin edge.

The nature of the grind is not entirely convincing. The tall blade and shallow grind on the 240, for instance, lend to generally smooth cuts and good separation. But the height could cause the knife to stick a bit in thick products like large carrots or large potatoes.

The 210 has fewer issues in that regard. The nakiri arguably none at all.

As with the grind on most high-quality J knives, the Matsubara is probably a delight for most, a minor thing for some and a no-no for a few.

In my case, it was a small thing. I found the Matsubara a pleasure to use, and it only took a little extra force with the 240 to finish a tougher cut.

Why such a tall blade?

I suspect the smith wanted to produce a knife that combines all the best traits. It is stiff and muscular coming out of the handle, thin and nimbe at the tip, able to cut easily but separate well, and it rocks and chops with equal ability.

By and large, I think the Matsubaras succeed, though there are some distinct differences between the 240 and 210.

The 240 has a nice flat spot in the back, but it also rocks better than most Japanese knives I’ve tried. The smith kept the tall blade from making the Matsubara unwieldy by keeping the length true. It’s really 240 mm or even a tad less. 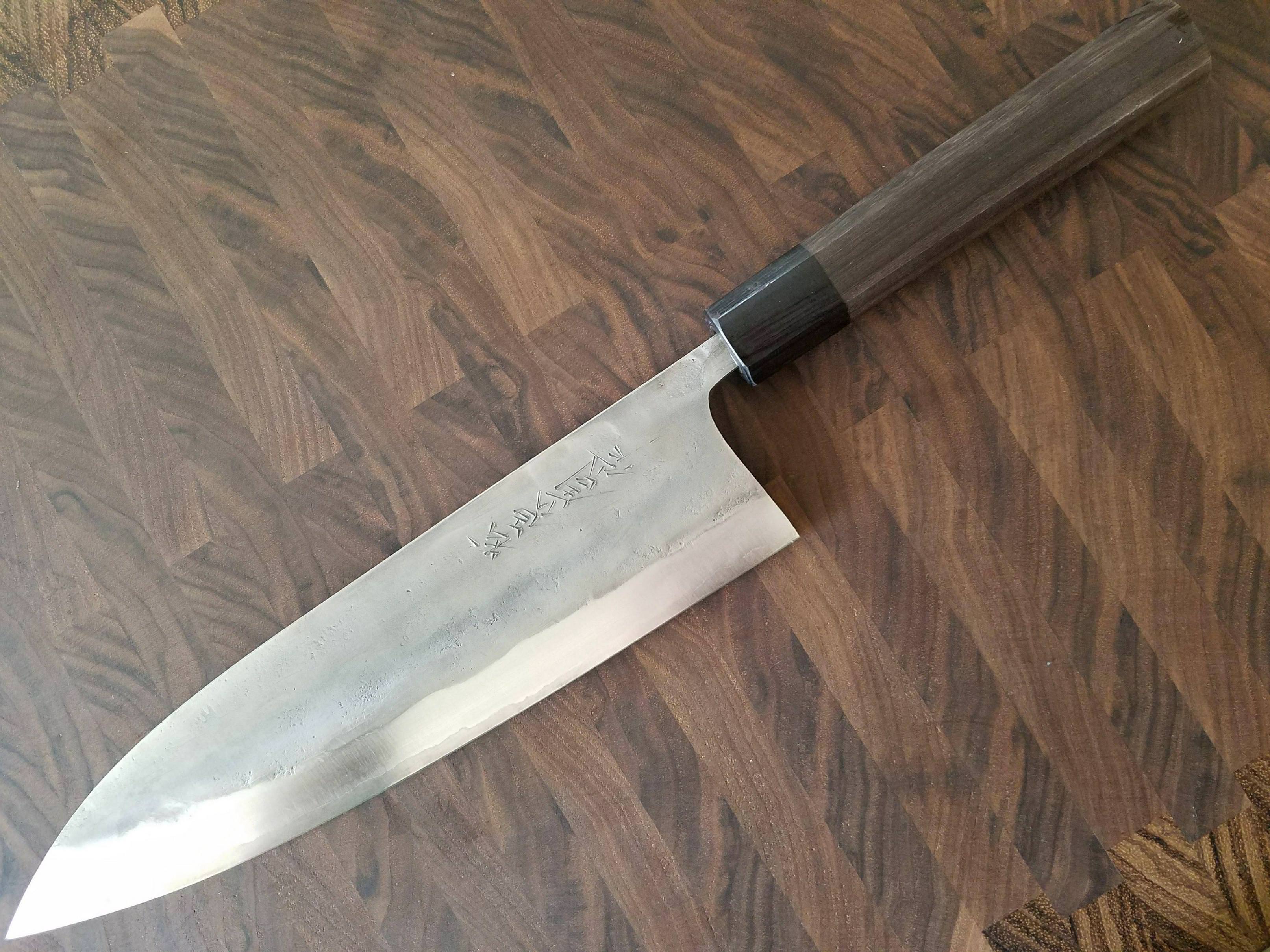 The 210 runs a bit overlength, but it doesn’t have a big flat spot. Chops well on soft product but works best as a pusher and rocker. It’s probably an even better rocker than its big brother.

Both knives can handle dense ingredients, but the 240 is a true heavyweight. Mine weighed 8.1 ounces and was 55 mm tall (vs CKTG list of 7 oz and 54 mm). It’s very forward weighted and has a lot of chopping power, but the edge is thin enough to work its way through any ingredient with a lighter hand.

The 210 is more nimble, weighing around 6.7 ounces. It’s also forward weighted, just not to the same degree as the 240. 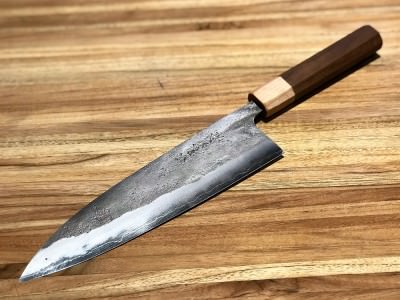 In the case of both the 240 and 210, most of the weight is in the rear half of the blade. The grind thins out rapidly toward the tip and results in the knife being noticeably light in the front third of the blade.

The pointy tip itself is excellent for detailed work. Shaving radishes and onions or flicking through garlic cloves was a joy.

If there’s a downside, the knife has to be raised higher for draw cuts. I did not find it off-putting, though. The excellent performance of the tip is a big selling point on knife so tall and stout, in my view.

The height of the 240 and even the 210, by the way, gives the Matsubara the scooping ability of a nakiri if that’s your thing. These knives are taller than all but of handful of the nakiris sold on CKTG.

I didn’t mention looks. These are fine looking knives. The nashiji has a distinctive rustic appearance with a hint of modernity. It probably helps with food separation, too.

Who would I recommend these knives for?

I think the 240 is a very good pro knife that somewhat resembles and performs like a Gihei B#2. Both the Gihei and Matsubara are versatile and tough - able to be used as blunt or surgical instruments.

I personally like the tip on the Matsubara better and the profile appeals to me more. Even though both of these knives can top 8 ounces, the Matsubara feels more nimble to me.

I think this line of knives is good for home cooks, too. But you have to be comfortable with talle blades and prefer knives with good rocking ability.

The nakiri is a chopping machine. Though I found it fun to use, I think it’s best for people who chop a ton of ingredients a lot. Or those who have the money to spare and want to keep something like this around as a change of pace.

The biggest caveat is the variability in the Matsubara line of knives. They seem to show bigger differences in weight than other CKTG offerings. I sold my 240 recently, but I probably will buy another in the future if I can can get one that weighs a bit less. My sweet spot for a knife like this would be about 7.5 ounces.
Jeffry B
Top

Great to hear the comparisons on these beautiful knives! Thanks!
Top

Enjoyable review! I have the tall Nakiri and the 210, I see them staying with for a long time.
“The goal is to die with memories, not dreams.”
Top

Just looking at the choil shot of the latest custom tall nakiri on the site. Was wondering if it has an s-grind to it?
Top

Sure looks like it. I think the nakiri I used was similar. My 240 did not have an S grind, however.
Jeffry B
Top

I have a matsubara 210 B2 Gyuto that I purchased a few weeks ago - very tall for a 210. Going to use it to do golf banquet (company league - about 50 of us) next week for everything. Sharpened it and cut some onions and carrots with the thing. Takes a great edge and will be going at veg and lamb on its first real test. I' just a goofy physicist who likes to cook - 50-80 is a good test, but my church is going to re-open the homeless kitchen this fall (church is nearly 170 years old and needed some serious structural work - closed for three years) I got to help pick the kitchen and will be testing it this fall cooking for 4-500 for lunch on a couple Saturday's a month. This knife may get a few runs before Christmas.
Top